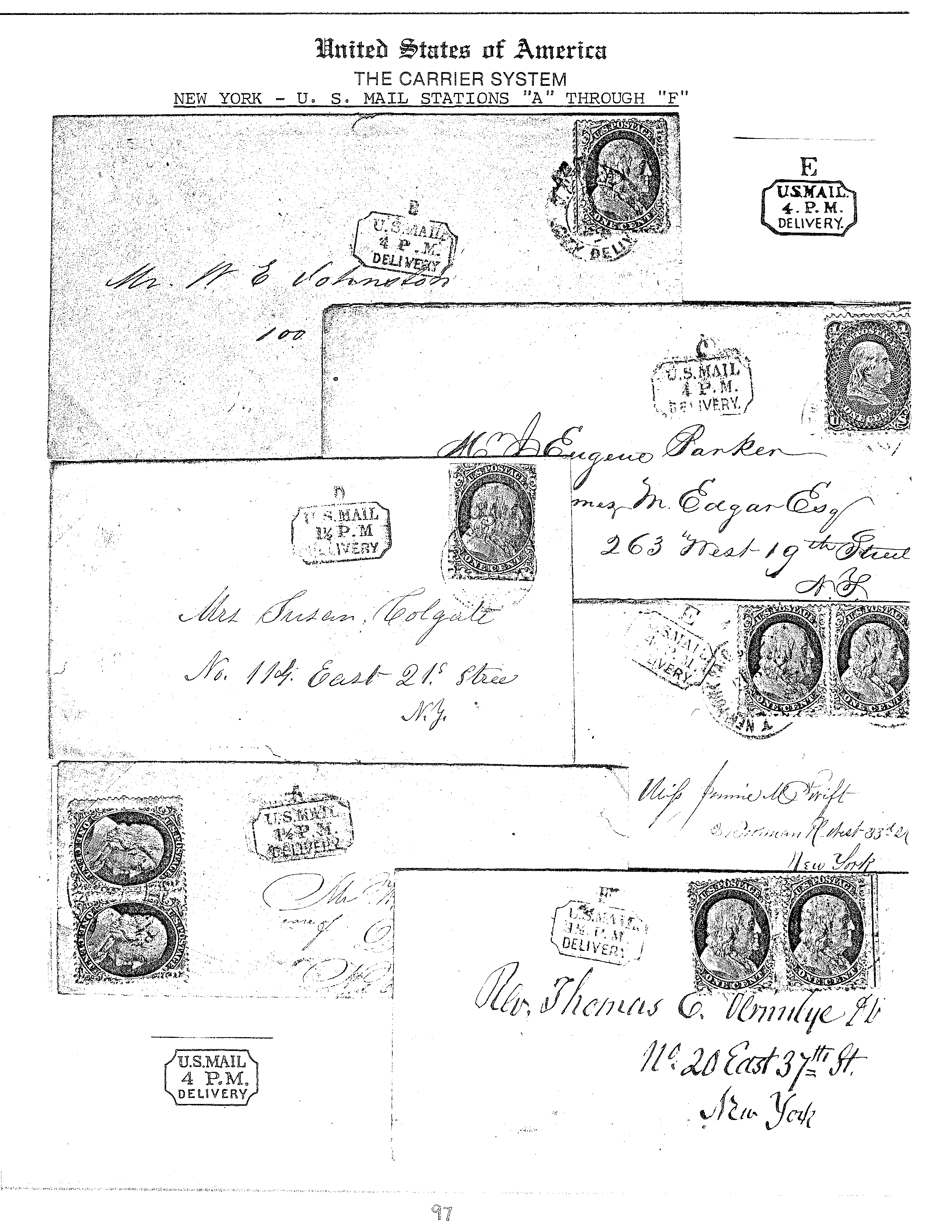 This exhibit examines the workings of the government carrier services in a dozen post offices with carrier departments, arranged alphabetically. Several examples of private letter dispatch service and independant mail service are included for their particular contribution to the overall history. 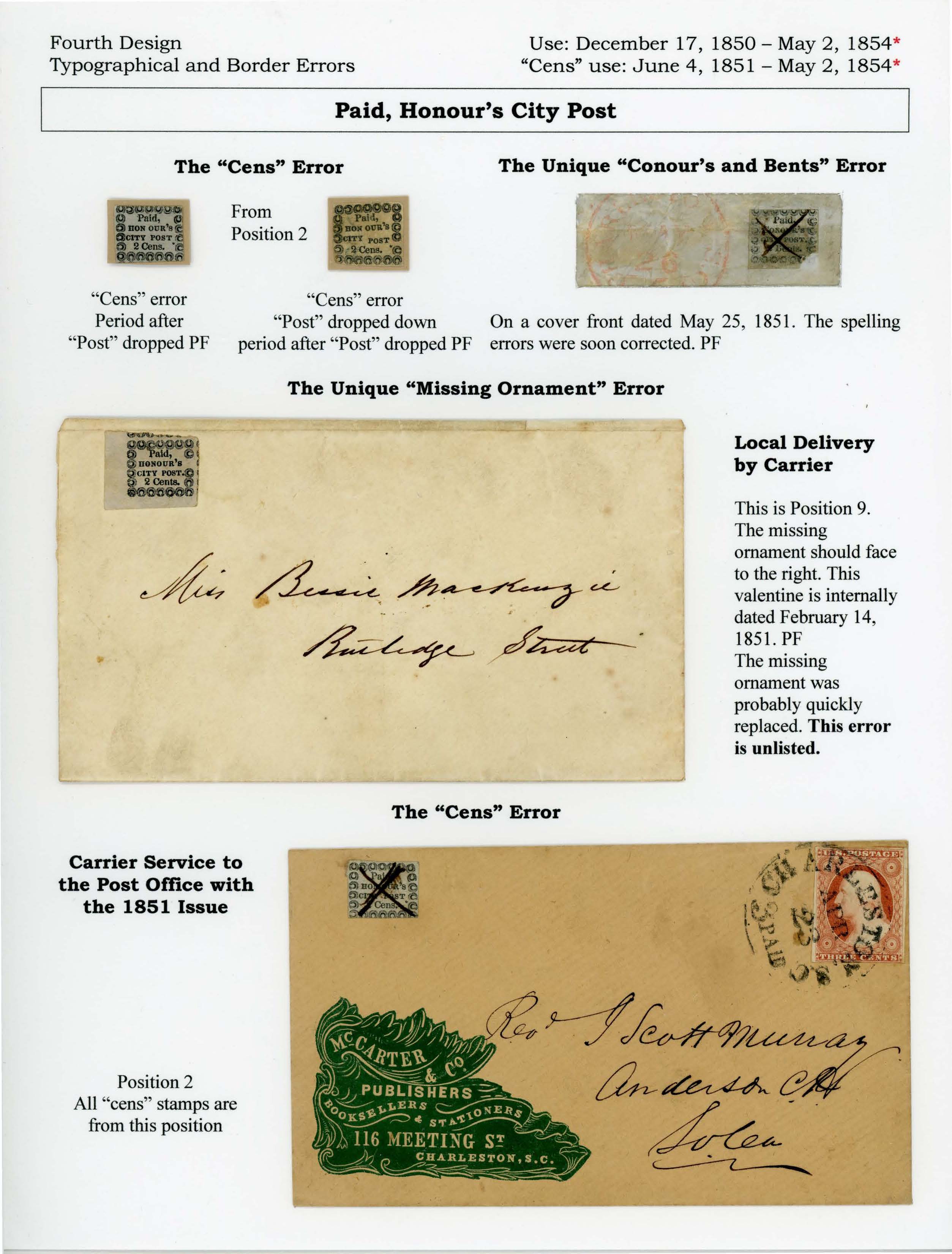 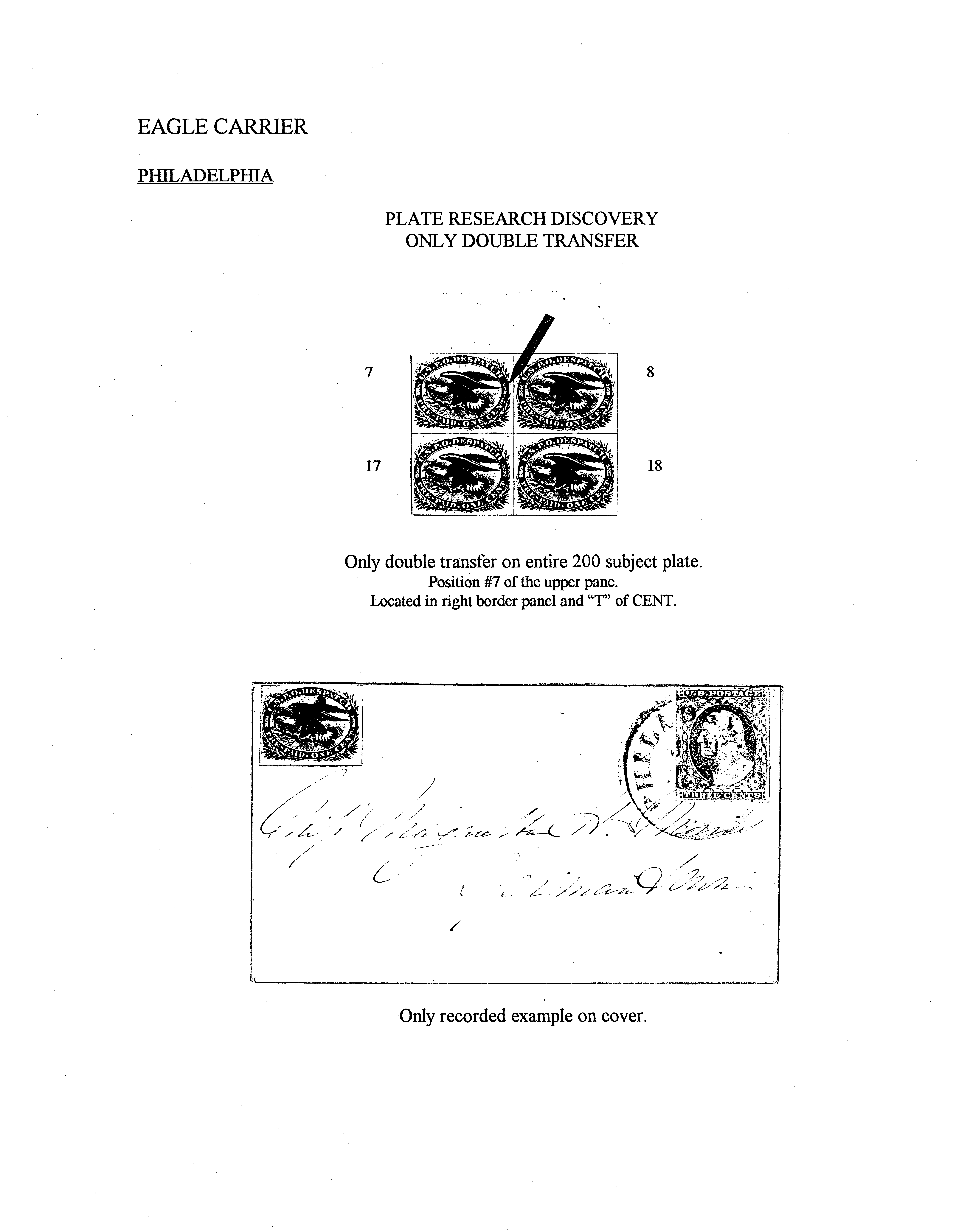 This exhibit begins with the official carriers, the Franklin and Eagle carrier stamps, showing their proofs, reprints, and usage by city alphabetically. This is followed by evidence of carrier service activity in cities arranged alphabetically, with use of semiofficial carrier stamps, regular postal issues to prepay carrier services, as well as the numerous and varied carrier markings employed. The major carrier cities, New York, Philadelphia, Boston, and Baltimore experienced more carrier activity than other carrier cities, and therefore provide more examples of this activity than do the other cities included here. Other cities with carrier service during tile carrier fee period shown here include Brooklyn, "Charleston, Charlestown, Cincinnati, Cleveland, Louisville, Lowell, New Orleans, Portland, and Washington. 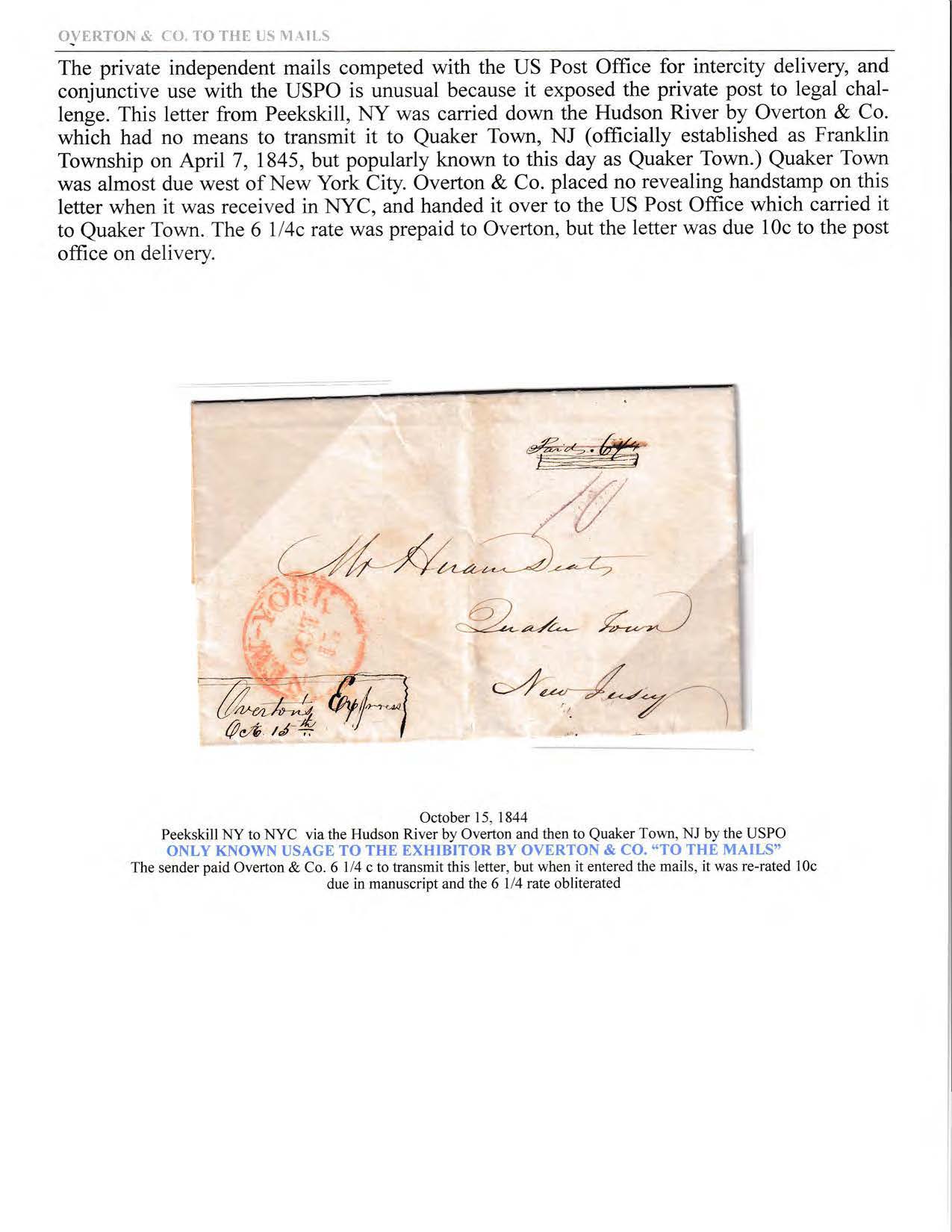 The purpose of this exhibit is to illustrate the postal services offered by Overton and Co., a minor competitor against the US Post Office for intercity delivery in comparison to Hale & Co., American Letter Mail Co., and others. Such companies are called the Independent Mails. And analysis of its postal history reveals that Overton's was able to maintain business operations despite intense competition from other private companies. It survived by acquiring the agents and offices of other companies, offering "cheap postage rates" between cities, and providing early local address delivery which the other independent mail companies did not do. 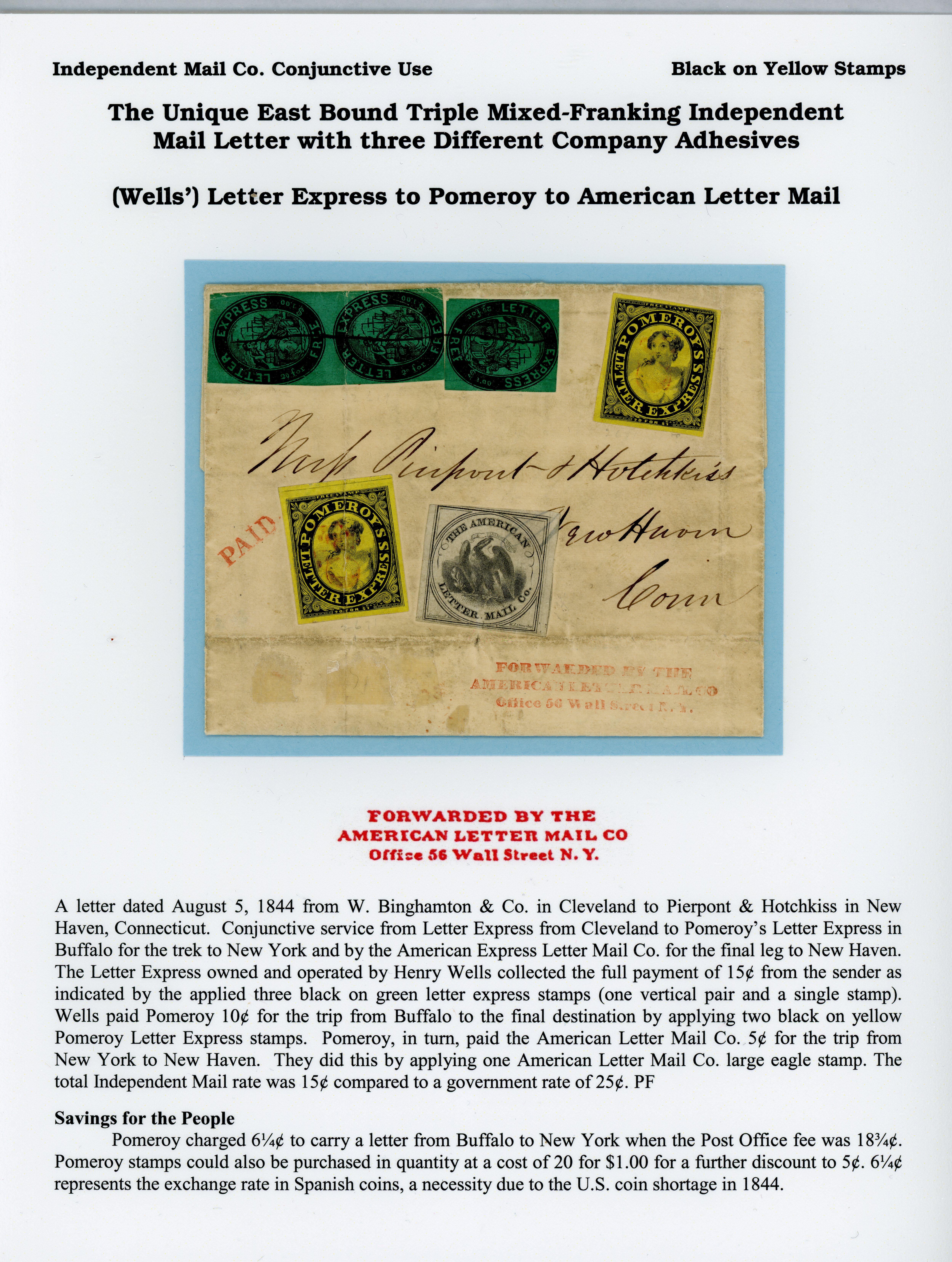 Pomeroy's Letter Express: A Tale of Deceit, Success and Shutdown 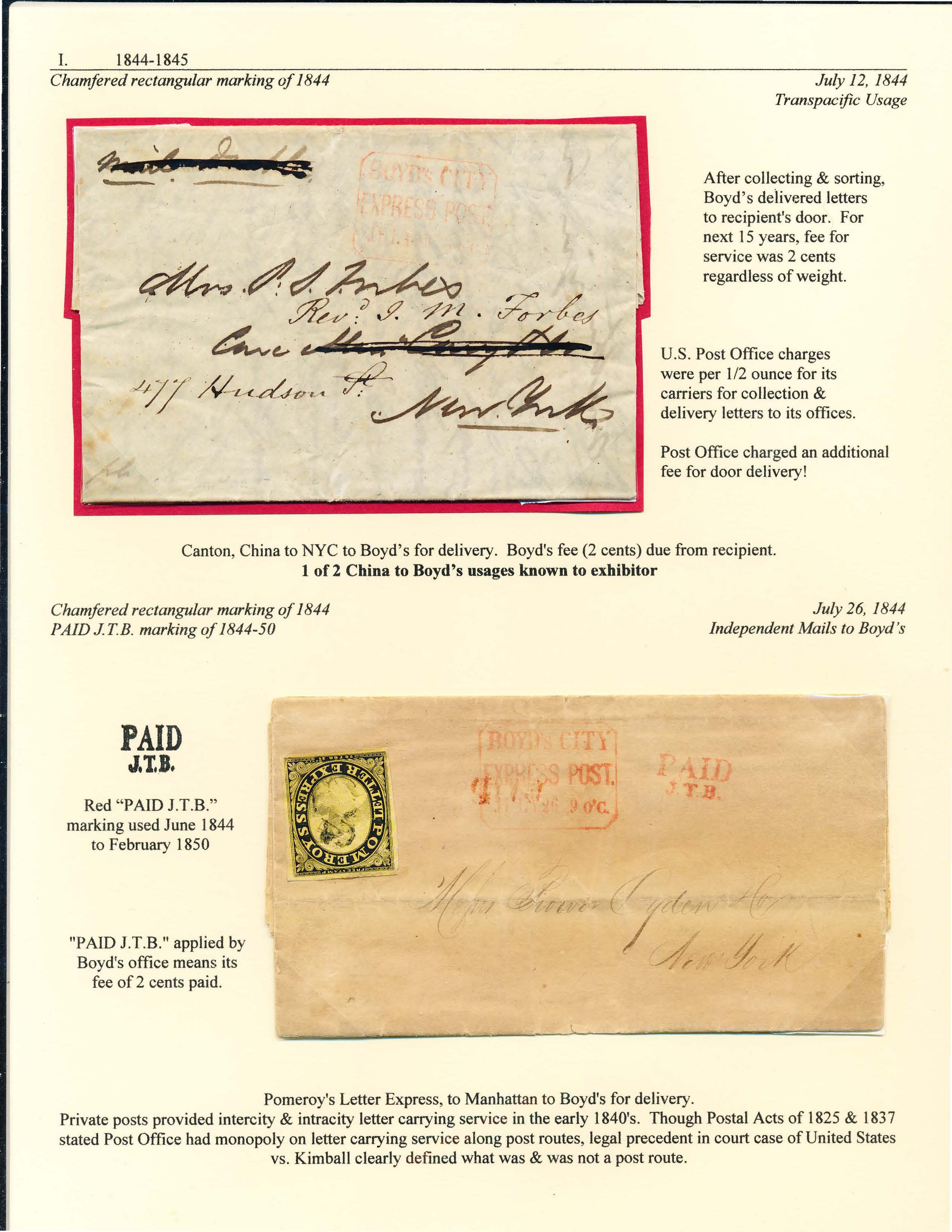 Boyd's City Express Post, later known as Boyd's City Dispatch and finally as Boyd's Dispatch was arguably the most important and successful of the U.S. local posts! Their longtime success proved private enterprise served Manhattan's mail patrons better. Significant Earliest Known Usage (EKU) and Latest Known Usage (LKU) research and discoveries of Boyd's postal markings and adhesive usages are found throughout the exhibit. EKU and LKU information for Boyd's markings and postal emissions are based on Abt's article, Boyd's City Express Post as noted in the bibliography. The purpose of this cover exhibit is to show the viewer that the U.S. Post Office did not always have a monopoly on letter or mail handling services. 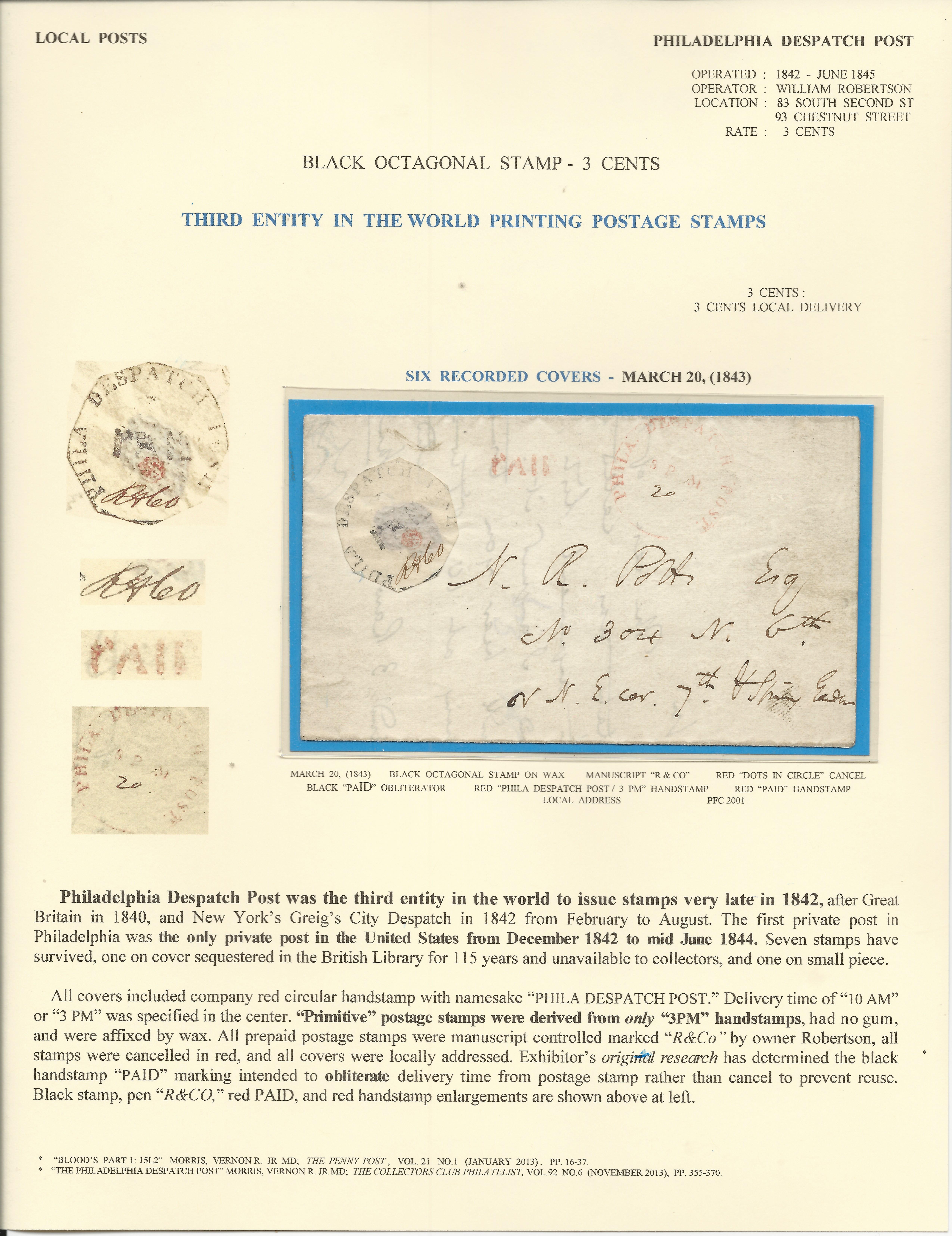 Fighting the Fed in Philadelphia

During the mid 19th century Philadelphia was the second most populous city in the United States, fourth in the Western World. This postal history exhibit reveals the competitive struggle between private and government mail delivery. Postal rates were reduced by approximately two thirds and service greatly improved. Philadelphia is unmatched by any city in the world for it's diverse, colorful, and rich legacy during the formative years of philately.